The Moon Knight Series is a very anticipated TV series, and celebrity journalist Daniel Richtman has recently revealed something important about it. While we don’t know a lot about the upcoming show, we might have just found out who one of the villains of the show could be. And this is all thanks to Daniel Richtman.

The Villains Of Moon Knight Series:

We earlier found out that Stained Glass Scarlet would be one of the villains of the show. However, a new report from Daniel Richtman says that the most famous villain of Moon Knight will also appear in the show. And this villain is none other than Moon Knight’s adversary Bushman. This is one of the many facts that fans had speculated early on. However, the report just hints towards a stronger possibility of this actually happening. 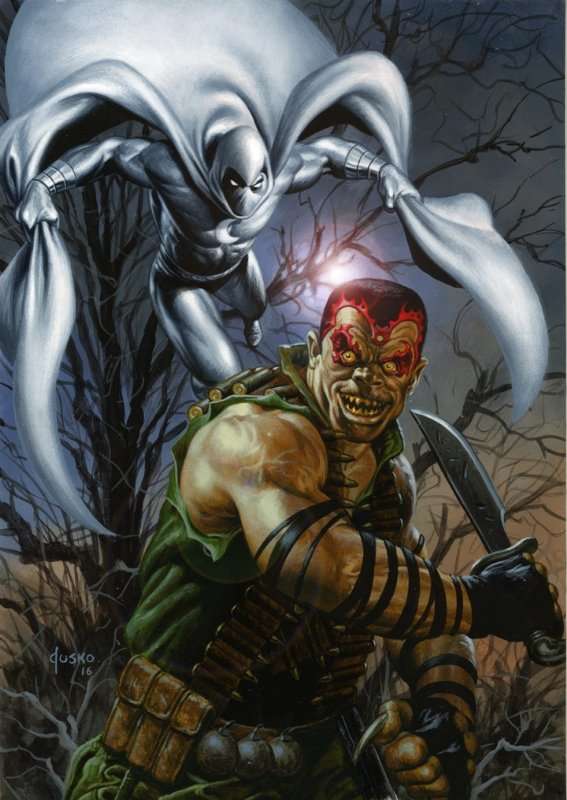 Daniel Richtman’s post on his website is quite brief and to the point. Therefore, we cannot actually say if Bushman will be the main villain or not. Regardless, if we had to guess, we would think that Scarlet would be a side villain instead of the main enemy. This also makes sense if Bushman ends up becoming the main adversary.

Additionally, the series could also take an approach based more on the character’s origin. And if that happens, we could see his transformation into Bushman. Subsequently, this could also get him his full shine in whichever film we next see Moon Knight in.

Who Is Moon Knight?

For those who don’t know, Moon Knight is actually Marc Spector. He is a former CIA agent who was almost killed by a terrorist called Bushman. However, the Moon God Khonshu saved him from dying. Subsequently, he defeated Bushman and became the Moon Knight. His trademark is the all-white costume which he is usually seen in.

Moreover, Marc Spector isn’t his only personality, so to say. Four different personalities reside inside Marc’s head. And all of these are different variations of the core person that he is. Apart from Spector, his mind is home to Steven Grant, Jake Lockley as well as Khonshu himself.

Furthermore, all of these four interact and cooperate with each other in addition to fighting for control. And this is what makes the hero different from other MCU heroes. This is also why Moon Knight goes to places where others don’t.

Ms. Marvel on Disney+ just found its directors While the movies are in a bit of a holding pattern at the moment thanks to the...
Read more
Marvel

Black Widow Will Be Different Than Other Marvel Movies

Black Widow is set to be the next entry in the Marvel Cinematic Universe, finally offering fans a glimpse into the leather-clad assassin's shadowy...
Read more
Movies

Why You Should Watch The Devil All The Time

The grim Tom Holland thriller that's dominating on Netflix Even though theatres across the globe are slow to reopen, there's still hope for those looking...
Read more