The News Fetcher
Home Uncategorized The Mysterio Illusion Nobody Noticed In ‘Spider-Man: Far From Home’
Uncategorized

The Mysterio Illusion Nobody Noticed In ‘Spider-Man: Far From Home’

Spider-Man: Far From Home is now available for viewers for home release. So, fans are catching a lot of Easter eggs and facts that they did not in theatres. Among these are many illusions which include the villain of the film, MCU Mysterio. Mysterio had really affected Spidey’s head a lot. And sometimes, it takes a lot more than physical strength to break down a hero. Many times, it is the psychological thing that does a lot more damage. In this regard, a fan has noticed a minor, yet intricate detail in the movie. And it is about Mysterio, Spider-Man villain, in addition to Spidey’s foe.

The Detail About MCU Mysterio:

Recently, Reddit user, DumbleDormammmu, took to his account to point out something fans did not catch in the theatres. In Far From Home, there is a scene where Spider-Man falls out of a building sue to Mysterio’s elaborate illusion. According to the fan, Spidey falls right on Nick Fury’s car. Of course, this isn’t the actual Nick Fury’s car. Instead, this Nick Fury is actually the MCU villain Mysterio, in disguise.

Just caught another Mysterio Illusion. The crappy car that Peter falls on during the first Mysterio fight is the same one in which "Nick Fury" drove them there, but without the illusions upon it. It also explains why the seat belt wasn’t working right. from MarvelStudiosSpoilers

Moreover, the Nick Fury in this movie isn’t actually Nick Fury, at all. However, this car that Spidey falls on does not have any of Mysterio’s illusions. Although, there is one-minute detail that we may have not noticed. This is the fact that the seat belt in the car is broken. 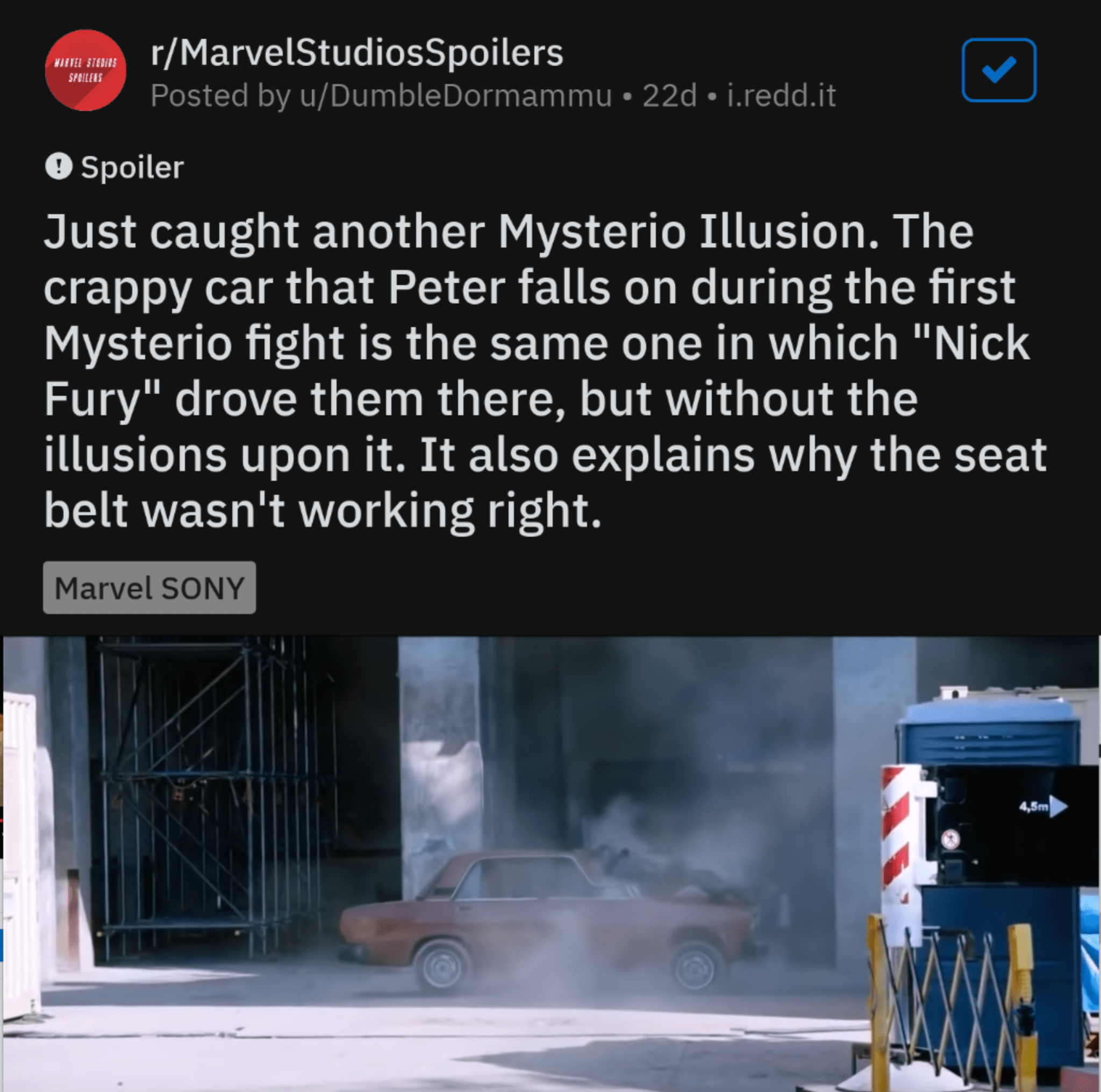 Other Details Of The Mysterio Spider-Man Scene:

Regardless, when Peter gets up from smashing into the car, MCU Mysterio’s illusions do not stop there. Therefore, this means that the crappy car is still a part of the whole facade. And in this way, Mysterio includes this piece just so that he can mess with this kid even more.

In the film, Jake Gyllenhaal plays Mysterio, a great villain the rogue’s gallery of live-action Spider-Man. He might also be the best villain in Spidey’s franchise until now. The twists of Mysterio easily beat Vulture’s tenfold, where we find out he is Liz Allan’s father.

Here's the OnePlus 8 Pro ad starring Robert Downey Jr. that was in the news for a month now. In case you don't recall,...
Read more
Uncategorized

Each SuperHero Movie that is going to release in 2020. Marvel Studios, DC Films, and Sony Pictures are planning to release several films about superheroes,...
Read more
Marvel