Rey Skywalker To Get A Satisfying Ending:

Furthermore, it will end not just the sequel trilogy, but also the entire Skywalker Saga. Fans are eagerly waiting to see how the story will end.

Rey Skywalker And Her Story In Star Wars:

Debuting in The Force Awakens, Rey Skywalker went on to become an iconic figure in Star Wars.

Moreover, her journey over the course of two films has been nothing less than thrilling. Rey Skywalker was initially a scavenger from Jakku, who gradually uncovered her Force abilities. Soon, she was strong enough to fight off Kylo Ren all by herself.

But now, with The Rise of Skywalker drawing even closer, fans are curious if she’ll turn to the Dark Side again. Or whether she will continue to fight for the Resistance.

Ridley’s Interview And Comments About Her Character’s Future:

In a recent interview, Actress Daisy Ridley was asked about her feelings about the end of Rey’s journey. As a response, the actress thinks Rey’s ending is something that fans will respond well to. She said:

“I think doing it, even doing the finals scenes I have, be them alone, be them with other people, from a personal experience, I remember feeling really filled up with a really satisfying emotion of like, it just felt really right, and watching it I think, it’s not like a big showy ending, it’s just a beautiful, emotion thing that I think people will carry with them.” 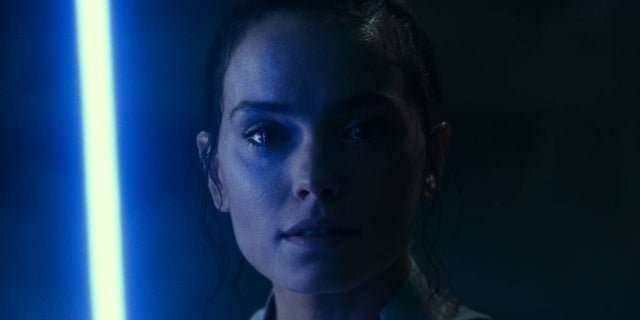 The film also sees the departures of Finn and Poe. In saying so, this marks the end of the line for the trio. Therefore, the film needs to give these characters proper endings.

Since Rey Skywalker is the unofficial leader of the sequel trilogy, it is not surprising that she will hopefully be getting a beautiful, yet emotional ending. This will be an ending that she deserves.

The presence of Dark Rey suggests that her journey might not go the way people expect it to. It could even take a detour, at the very least. Regardless, we are hopeful that Rey Skywalker will be given a brighter end, with Finn and Poe. This is also because she deserves a peaceful end.

A List Of All Star Wars Movies: The Skywalker saga will soon come to an end. But there still remain many more Star Wars...
Read more
Star Wars