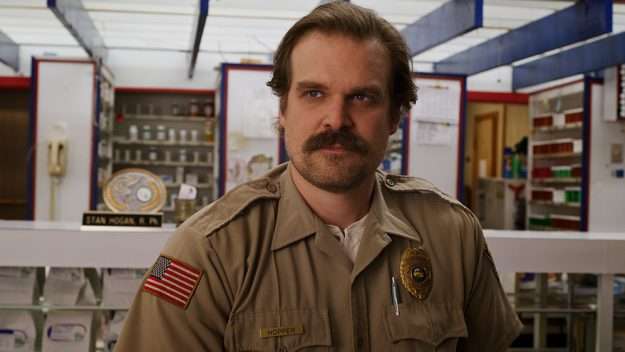 David Harbour is a star of Stranger Things. He is famous for the performance that he has given in the Stranger Things and now will be playing the role of Alexie which is confirmed by Disney to be somehow similar to the role of Chris Evan’s Captain America. The recent panel had been organized by Marvel Studios in San Diego where Cate Shortland and a majority of the cast of Black Widow were invited. They all were called to unveil casting and a bit of footage for the upcoming series. David has been confirmed to be like the Russian hero famous with the name Red Guardian. This was confirmed by Disney.

Furthermore, the reports at comic con got the opportunity to catch up with David Harbour after the panel. Harbour described exactly how his character resembles the Russian version of Chris Evan’s Captain America. It was a beneficial meet and a lot of things were revealed after the panel. According to Harbor, he likes his character a lot and the catchiest thing is that the same resembles the Russian version of the character being played in Captain America. According to the interview, Harbour mentions that ‘There is openness to interpretation. The one thing we do know is that he’s the counterpart to Captain America on the Russian Soviet side, but that way we have a lot of play with who he is and we are playing with him’. This is what he exactly said after the panel.

Adding further, Harbour said that the character is full of twists and turns in the way that makes sense. He added to the statement, these twists and turns were never expected by him in any other character. Also, according to Harbour, a character must be full of color and flavor and he said that ‘we got to know them and this guy is really rich’. Earlier a meeting was held with Harbour and that time as well he could not stop talking about the extraordinary work by Cate and the production team.

He said in the interview, ‘This woman, Cate Shortland, who is directing the movie, is one of the best directors I’ve ever worked with’. This is indeed the best compliment for a director. According to him, Cate is smart and knows what exactly the public wants to see. Also, he added, that Cate deserves to be a part of such a big movie as she pays attention to the story and the character in the right way. Adding further, he said that Cate has directed some of the best movies and this one is going to be another hit and the fans will love the movie.

He added, he is really happy to work with Cate and the production team of the film and the role that he has got is totally unique. The character he is playing is on a higher scale and such a passionate role has never been done by him ever before.