The News Fetcher
Home Movies Marvel Marvel The Eternals Movie Cast, The Roles They Have And Their Powers
MoviesMarvel

Marvel The Eternals Movie Cast, The Roles They Have And Their Powers 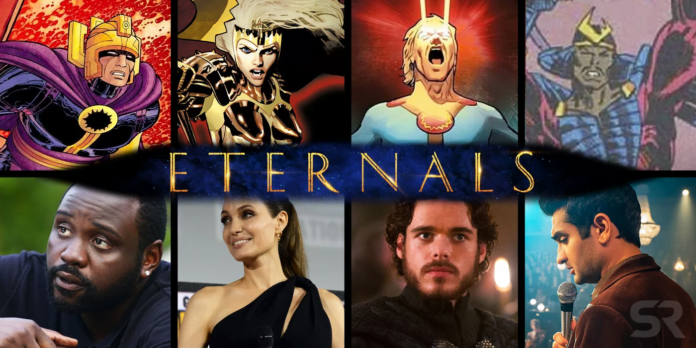 The Cast Of Marvel The Eternals Movie:

We recently found out about the release of Marvel The Eternals Movie. The film is a part of Marvel’s Phase 4, which will introduce a lot of new characters in the MCU. This particular movie is full of Hollywood A-listers gracing the screen. This includes Angelina Jolie, Salma Hayek, Richard Madden, and more. If you’re not familiar with the comics, you’re probably wondering what you should know about this new group of super-powered beings.

Who Are The Eternals?

According to Kevin Feige, “[They’re] a group of immortals who have been on Earth for 35,000 years. They’ve been there amongst the MCU.” They made their debut in 1976, in the Jack Kirby comics. Additionally, two other groups were also introduced by the comic. These were created by the celestial Gods.

Marvel chief Kevin Feige gave us names of eight of the Eternals who would be in the film at the 2019 SDCC. Following this, we got three more characters at Disney’s D23 Expo in August 2019. One thing which is common is that a lot of the characters are gender-swapped from their original versions. Since they’re all cut from the same cloth, the majority of them all have similar superhuman abilities. This includes superhuman strength and the ability to fly.

From Richard Madden to Angelina Jolie, keep reading to meet the cast and see who they will be playing next fall.

“Game Of Thrones” Star Richard Madden Is Playing Ikaris, One Of The Leaders Of Marvel The Eternals Movie:

When Ikaris is first introduced in the comics, he’s undercover as a human on Earth named Ike Harris. Ikaris’s character can fly and levitate others as well. Additionally, he can also shoot beams of cosmic energy from his eyes and teleport. His character is an “all-powerful” one.

Salma Hayek Is Playing A Gender-Swapped Version Of Ajak In The Eternals:

Ajak makes his debut as a man by Kirby in the second issue of “The Eternals.” The character is worshipped by the Incans as Tecumotzin. He was also buried deep in an Incan tomb to sleep until he was woken up by Ikaris. He is an Eternal who also fought in the Trojan War.

Thena is born in Olympia and is the daughter of Zuras. In Marvel Comics, she has a secret love affair with an enemy of the Eternals named Kro. Thena can also fly, has super strength, and super speed, just like the other Eternals.

Don Lee (a.k.a Dong-Seok Ma) Will Be Gilgamesh In The Eternals Cast:

In the comics, Gilgamesh is first introduced as the Forgotten One. He is an Eternal who was exiled from his kind by Zuras because he spent too much time around humans. Because of that, the character became known by several legendary aliases. This includes Hercules, Beowulf, as well as Gilgamesh. He eventually joined the Avengers in the comics.

Makkari is a speedster who is often described as an impatient Eternal. Makkari has a vibrant red suit and masks in the comics. She is also known as Mercury. Ridloff joined The Walking Dead in its ninth season and instantly became a fan-favorite. She will play the first deaf hero in the Marvel Cinematic Universe.

Kingo Sunen is supposed to be one of the most skilled swordsmen on Earth. He has spent a lot of time training with Samurai. And it is due to this that he transitioned into becoming a famous Japanese action star. Marvel may be changing up the character a bit in the film. This is because, in its official description of the movie, Kingo is described as being “cosmic-powered.”

Lia McHugh Plays A Gender-Swapped Version Of Sprite In Marvel The Eternals Movie:

In Marvel comics, Sprite is a young boy who is able to change his appearance. Despite looking like a young teen, the Eternal is pretty old. He is literally thousands of years old. So, don’t go by his appearance. He just cannot age. Because of that, the young-looking Eternal likes to play tricks, often at the expense of his own kind.

Brian Tyree Henry (“Atlanta”) Is Playing The Role Of Phaistos In The Eternals:

Unlike the other Eternals, Phaistos was introduced later in Marvel Comics in 1985. Sources suggest that he also has powers similar to the rest of the Eternals. He is fast, super strong and can also fly. Additionally, he is also an engineer and inventor. He is the one who made Kingo’s sword.

Sersi, also known as The Mistress of Illusions, is an Eternal who willingly lives among humans in New York City. In the comics, she also becomes a member of the Avengers. It was originally thought that Angelina Jolie would play the role.

“Game Of Thrones” Star Kit Harington Was Cast As Dane Whitman, A Non-Eternal, Who Becomes A Hero Known As Black Knight:

Richard Madden won’t be the only “GoT” actor entering the Marvel Cinematic Universe. Kit Harington’s Dane Whitman is a physicist. He is the one who takes over the mantle of the Black Knight from his uncle. However, what he didn’t know is that the Black Knight was known as a supervillain. Whitman may not be super-powered like the Eternals, but he is quite skilled with a sword.

Drug was a member of the KGB. He is also Ikaris’ cousin. Marvel Studios describes the character as an “aloof loner.” Just like the other Eternals, he can fly and teleport. Additionally, he can also manipulate atoms.

Other Noteworthy Eternals That We Can Expect To See In The Movie:

The Eternals Cast mentioned above aren’t the only Eternals we know of. There are over 30 of them, according to the comics. Others Eternals that we can expect to see in the Marvel film might include Zuras (Thena’s father) as well as Domo, who is an immortal Eternal. As of now, we just have to wait for another official announcement about this from Marvel Studios itself.