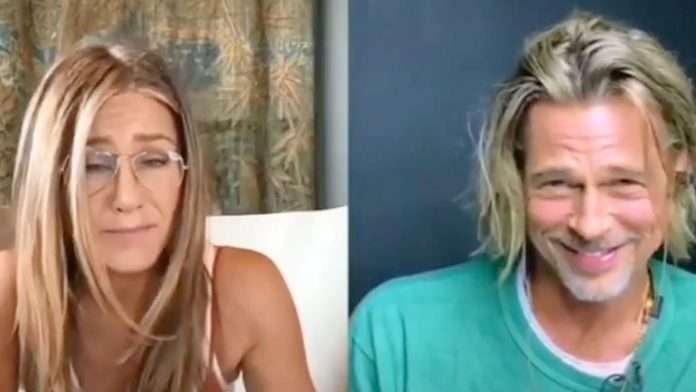 Brad Pitt and Jen Aniston. Ahh… It’s so soothing to just hear the words together.

Even though Brad is known to break Jen’s heart, all we could think about is seeing them back together. Maybe not permanently, but they did just join the virtual table reading of iconic ‘Fast Times at Ridgemont High’ movie.

Chrissy Teigen was basically us looking at her husband’s screen and saying “WTF” after seeing so many celebrities at the same time. Julia Roberts couldn’t stop smiling, looking at Jen, and Brad read the love scene at the ranch.

We will start a, “We hate Brad Pitt Club!”

This reunion had thrown the internet into a frenzy, and no one is over it yet. As much as we enjoy Brad and his new pictures with whatever cliche 26-year-old model he chooses to date, we do want a reunion of him and Jen in real life. But Brad, beware!!!! You break her heart, We will bury you!!

Lilie Reinhart has gone under the fire for asking fans to let them both be and not to disturb them. Even though we do agree with her point of asking the people to give the celebrities their space…We don’t think crazy fans of the couple will stand down.

In an award show before this circus of a freak coronavirus came, we saw the couple speak for one minute on the carpet, with all smiles and the internet completely lost its cool and jumped hoping they are back. But Brad Pitt was recently seen on vacation with a 26-year-old model stomping all over the dreams of Jen and Brad’s fans.

We are not going to push them together; that’s for sure. But boy, do I hope on seeing them hand in hand one day!!!

Tom Ellis has made his fans furious after he went on a blocking rampage on Twitter. Tom Ellis is Over Party From October 25, 2020 night,...
Read more
Celebrities

Is this the most controversial celebrity photo cropping incident since Diddy famously cut Kendall and Kylie Jenner out of his Met Gala photo? Robert Downey...
Read more